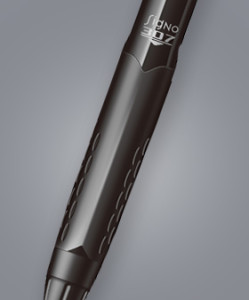 Most of my writing is done on computer so I don't use pen that often. But when I do, I pretty much always use Uni-ball Signo 207. It is a pen that has been available for ages now in multiple tip widths, my favorite being alternated between 0.5 and 0.7 millimeters. It is comfortable, has a good quality ink, a reasonable price, and it can be found pretty much anywhere. Now Uni-ball decided to give it a bit of an update with the new Signo 307.

General shape is pretty much exactly the same between those two. If 207 fits your writing style, 307 will fit too. Major difference is omitting a few metallic details found on the 207 with all-plastic design. This slightly decreased pen weight but it's hardly noticeable. For me it had mostly visual and durability impact as the new plastic clip seems a bit more prone to breaking.

Visually it is a black barell with a nice checkered background on upper cylinder. Clicker, clip, and ring details are in the ink color. I find blue looks the best, red details are a bit too bright for me and black looks really dull. Interesting tidbit is the clip plate which has a thin plastic tooling mark on 207 but it is beautifully smooth on 307.

Clicker is a bit harder to press on the new 307 but I don't see it as a major problem. Since spring looks identical in both you can always swap it from the 207. It also might be just a slight manufacturing difference as all my 207 were bought in previous years. If that is the case, just grow some muscles. :)

Existing Signo series gel is really smooth, nicely colored, and dries reasonably fast. Although the new Signo 307 comes with supposedly better gel formula (UMR-87E), I found no discernible difference between it and older 207 (UMR-87). Even if somehow ink update makes a difference in your case, barrels are fully compatible so you can mix and match to your liking. At this time Signo 307 is available only in 0.7 mm so those preferring thinner writing will have to stick with the 207. However, I have no doubt that other widths are going to become available in near future.

In the end, it all comes to the looks and I find Signo 307 looks are a slight improvement over 207 despite its all-plastic design. But either one will do.