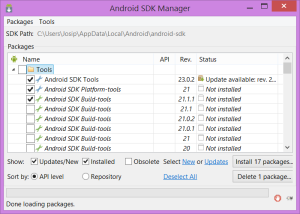 As I saw today Android 5.0 (Lollipop) factory images, I got a twitch going on. Yes, I could wait OTA a week or so or I could install the newest Android OS on my phone immediately at the cost of data. It took me a whole second to know the answer.

First step was to install Java. I took latest x64 Java Development Kit and got that pest (temporarily) on my machine. Next step was to get Android SDK Tools. I opted to get it as a standalone install.

Upon starting Android SDK Tools, I just installed all packages offered by default. Nitpickers might say that you only need Platform Tools and Google USB Driver but I find it much easier to click Next, Next, Next until cows come home or all needed gets installed.

Last part of puzzle was actual factory image for Nexus 4. All files from it I unpacked in the same directory where fastboot.exe was installed. Since I took all defaults this was at %USERPROFILE%\AppData\Local\Android\android-sdk\platform-tools.

Now I powered off my mobile phone and powered it back on while holding Volume down button. This brought me into the FastBoot mode and I connected my USB cable only to have device not be recognized. Therefore I had to go to the Device Manager and right-click Android device with a yellow question mark. Selecting Update Driver Software and then pointing dialog to the SDK directory (%USERPROFILE%\AppData\Local\Android\android-sdk in my case) allowed installation of Google’s USB Driver.

Now I could start cmd.exe and unlock my phone:

This gave me a warning prompt on my mobile phone. To select Yes I had to use volume keys for the movement and power key for the confirmation. First step done.

Next step was to actually flash the phone. Fortunately Google provided nice script for that so I just started it (still in the %USERPROFILE%\AppData\Local\Android\android-sdk\platform-tools directory):

After two minutes your phone was be rebooting with a brand new OS. First reboot took quite some time (eight minutes on my device) so have some patience was needed.

After setting everything up I rebooted the phone once more into the FastBoot mode (power off; VolumeDown+Power). Then I started cmd.exe one last time and brought the lock back:

And with that installation of Lollipop was over.

PS: Interesting tidbit: during initial Lollipop setup I could only see 2.4 GHz wireless networks. As soon as I was connected, 5 GHz networks became visible too.