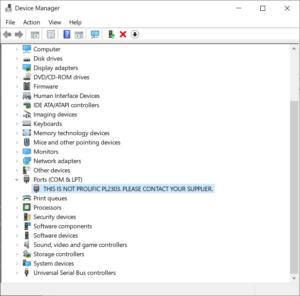 Well, it’s been a while since the FTDI fuckup so I guess it was a time for another IC supplier to go bonkers. Yes, it’s again time for a chip manufacturer to mess with your computer drivers.

Story starts with me searching for 5V USB cable with a 3.3V signal. After finding a suitable device, I did what was needed and forgot about it for a while. A few days ago I needed USB type-A serial device to do a quick loopback test and grabber the same, previously working, device. While the serial port did appear, I couldn’t open it or send any data.

A quick trip to Device Manager has shown a problem: “THIS IS NOT PROLIFIC PL2303. PLEASE CONTACT YOUR SUPPLIER.” Yes, it’s the exact nonsense that FTDI pulled years ago – using Microsoft Windows Update mechanism for their authenticity enforcement.

Now, you might thing this is their right. And I can see how they might be annoyed with fake chips using their drivers. However, their beef should be with fake chip suppliers and not with the end customer. For me the concept of bricking device owned by an unsuspected user is a bridge too far.

My case is probably the standard one. I bought device without knowing it has a fake chip in it. I paid the seller, he paid his supplied, his supplied paid the manufacturer and so on. Now my device stopped working. Money is long gone and so is the supplier of the fake chips. I might have lost that money. If I can ask for refund, the seller might be out of money. Manufacturer might be out of money (especially if they didn’t know they’re dealing with fakes). The only person not out of money is probably the guy selling fakes in the first place.

While Prolific might look at me as a potential new customer since I am in the market for a new cable, I believe that’s the wrong assumption. I am never going to knowingly buy a Prolific device again. Why? Because there is no way that I, as a customer, can check if device is indeed original or not.

What I do know is that Prolific is ready to play shenanigans with Microsoft update and brick my devices down the road. Since I cannot verify their authenticity myself, buying any Prolific device is something that might bite me in the ass. Unless something changes, I won’t buy a single Prolific cable ever again. Their product is nothing special and there are many other manufacturers happy to take my money.

I hope that Microsoft will rollback driver since it’s their update that’s causing issues for the customer. I also hope that Prolific will see the error of their ways and stop bricking customer devices. I am hoping, but not holding my breath for either.

PS: And yes, FTDI did say they saw the error of their ways back in 2014. Only to pull the same shit again in 2016. They learned nothing. Chances are neither will Prolific.

PPS: In meantime, you can download the older driver (v3.8.39.0 worked for me) and use it instead.