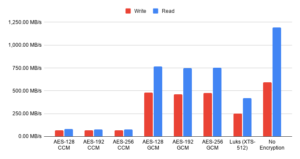 Back in the days of Ubuntu 20.04, I did some ZFS native encryption testing. Results were not promising to say the least but they were done using ZFS 0.8.3 on Ubuntu 20.04. There was a hope that Ubuntu 20.10 bringing 0.8.4 would have a lot of performance improvements. So I repeated my testing.

First I tested CCM and saw that results were 10-15% lower than in 20.04. However, this was probably not due to ZFS changes as both Luks and no-encryption numbers dropped too. As my testing was done on a virtual machine, it might not be anything related to Ubuntu at all. For all practical purposes, you can view those results as unchanged.

However, when I tested GCM encryption speed, I had to repeat test multiple times because I couldn't believe the results I was seeing. ZFS native encryption using GCM was only about 25% slower than no encryption at all and handily beating Luks numbers. Compared to the last year's times, GCM encryption got a fivefold improvement. That's what I call optimization.

Last year I suggested going with native ZFS encryption only when you are really interested in ZFS having direct physical access to drives or if you were interested in encrypted send/receive. For performance critical scenarios, Luks was the way to go.

Now I can honestly recommend going with the native ZFS encryption (provided you use GCM). It's as fast as Luks, allows ZFS to handle physical drives directly, and simplifies the setup. The only scenario where Luks still matters is if you want to completely hide your disk content as native encryption does leak some metadata (e.g. dataset properties). And no, you don't need to upgrade to 20.10 for the speed as some performance improvements have been backported to 20.04 too.

I have migrated my own main file server to ZFS native encryption some time ago mostly to give ZFS direct disk access and without much care for array speed. Now there is no reason not to use it on desktop either.

PPS: Test procedure is in the previous post so I didn't bother repeating it here.