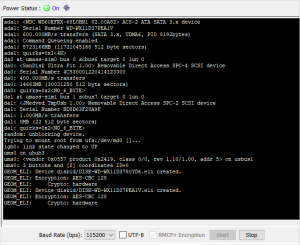 Having Supermicro A1SRi motherboard is awesome - especially when it comes to remote management over IPMI. However, as I have NAS4Free on it, one thing annoyed me all the time - why I don't see anything in IPMI Text Console tab? It's not that I really need it as iKVM works for me, but I find inactive things annoying. So I went to correct this grave omission.

Albeit it took me a while to configure it, the final setup is easy. Utter lack of documentation is what caused the drag.

First step is to enable console redirection in Supermicro's BIOS. While COM1 is best left to the BIOS itself, COM2/SOL is ours for taking. The only thing needed is to enable second serial console.

For the next (and final) step we must visit NAS4Free's GUI under System, Advanced, loader.conf in order to setup four variables controlling the boot process:

Using boot_multicons essentially tells FreeBSD to allow boot output to multiple consoles. Without this, only one console would be supported for boot messages.

That is crucial for the next console variable where we set console output to both video console (vidconsole) and to serial console (comconsole). And the order is important. While most messages will be mirrored on both outputs, some "userland" (e.g. application, rc.d, and script) messages will be displayed only on the first. I personally like to have that on the video console as it allows for color and looks nicer but your mileage (and needs) might vary.

Last two settings control which address the port is located at (COM2 is traditionally at 0x2F8) and the serial port speed has to match Supermicro's default of 115200 bauds.

PS: Yes, these steps work on FreeNAS too.