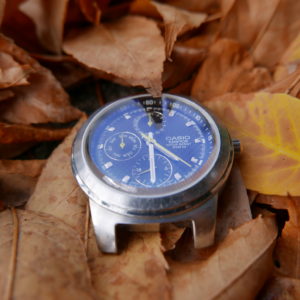 My beloved Casio Edifice has been on my wrist for years. And due to "gentleness" on my part, its mineral glass got scratched to the point of impacting readability. It was time for either a new watch or change of the glass. Guess which one I have chosen?

First task was the hardest - I had to find appropriately-sized replacement glass. Diameter was easy as you can measure it with calipers. Thickness was a bit more difficult. Someone doing it properly would disassemble the watch, remove crystal, and measure it. I just eyeballed it and decided that beveled 2.5 mm should fit just fine. And bevel did save me as its "unbeveled" height of 1.6 mm fits nicely in place of Casio's 2 mm flat mineral glass.

For the new glass, I didn't just want anything. I wanted to have sapphire as to minimize scratching in the future. And on that front I had choice between generic sapphire glass or a bit fancier AR coated ones. I went with blue AR coating as I felt it would bring a bit of pizzazz.

Once I received my glass, I was ready to begin with process. Instructions for it, of course, I found on YouTube. Disassembly went according to plan as soon as I took the bracelet off to ease handling. I used case opener to get the back off and then spent 10 minutes searching for a small hole to release the crown. With crown out the watch mechanism itself was trivial to remove.

All this was done while wearing finger cots (I find them much more comfortable than full gloves) and with occasional blow from dust blower. With quartz mechanism as one in this Casio, this might not be too important but I read too many horror stories about dust getting into gears so playing it safe seemed reasonable. To protect mechanism and avoid losing small parts I used a small plastic container.

Watch press was the most fidgety part of process because I had to find appropriately sized dies. Pains were worth it because glass did come out in a single piece despite the loud cracking noise.

As I have a good experience with silicon grease from my fountain pen hobby, I decided to get both case and the side of glass generously coated. Not sure whether my glass was better sized than one in video or due to silicone grease but glass was fitted on the first try. I found it so unbelievable that I had to check multiple times it's really in and fitted straight. While grease probably did help with inserting it also meant I had to spend a few minutes cleaning the excess. Well worth if you ask me.

With glass mounted it was time to reassemble the watch. As expected, the same steps followed in reverse direction were all it took. In hindsight, I should have tested waterproofness before returning mechanism in but I simply forgot. In any case, my son has been wearing it while swimming in pool a few times already thus proving it's reasonably waterproof. I wouldn't bet on full 100 m rating though.

With sapphire replacement watch got a new lease on life and completely new look. Polishing the case would probably bring me a step further but I'll save that for some later time. :)

Here is the list of all parts used in the course of swap. Note I didn't actually buy all these things specifically for this project (e.g. Calipers, silicon grease, and figer cots I had from before) but I listed them anyhow.

PS: Albeit pronoun I is used all throughout this text, most of work was actually done by my son while I was providing paternal support in form of instructions and warnings. :)