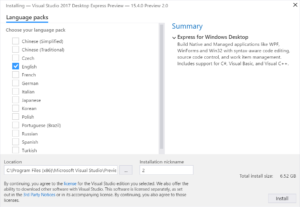 Moment I've been waiting for since Visual Studio 2017 was released is finally (almost) here.

While Community edition is more capable, restrictions on its use within anything but the smallest (or opensource) companies are quite limiting. Whereas developers can (hopefully) get at least Professional or even Enterprise edition, the same cannot be said for people who might need access to code just occasionally or who enjoy making small internal tools. For them Express used to be god-given due to its quite permissive licence.

Preview version does have license restrictions on production use, but my expectation is that final version will have the same licence as 2015.