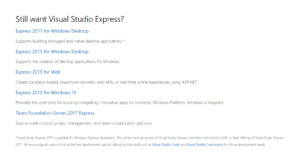 Honestly, I almost lost hope this day will come. However, finally there is a download of Visual Studio Express 2017. Because no sunshine can happen without clouds here in Redmond, only Desktop edition is available. Moreover, Microsoft found it necessary to clarify it further with the following asterisk:

Yep, this is the last edition for the fans of Express. It has been a good ride I guess.

PS: And no, answer is not using Community as its licencing restrictions make it wildly unsuitable for the whole host of scenarios where Express was shining. For example, use in a bigger company is not really allowed - even if you are not using it for production software but only for internal tools.