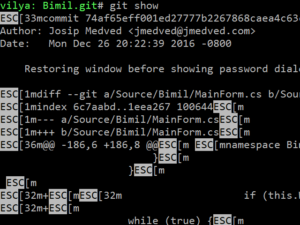 While I have quite a few of my projects exposed on GitHub, I also have a private stash on my FreeBSD-based file server.

After a bit of mess-up I had to modify repository directly on server. No biggie, I connected via Putty only to be greeted with a bunch of ESC nonsense upon every Git command execution. From output it was obvious that something was wrong with ANSI color support.

Adding --no-color to each Git command helped a bit but at the cost of color. Some commands that have no support for omitting color I just redirected to tee null. But that also came in black and white only.

After a while I noticed a pattern - Git commands that needed paging were messy while simple ones showed color just fine. On a whim I set Git pager to less:

And it worked - despite the fact less is generally a Git's default to start with.

My best guess is that package I installed doesn't agree well with my environment and that a few switches might actually solve it without Git reconfiguration. However, this worked and I had no will to continue chasing the rainbow any more. :)