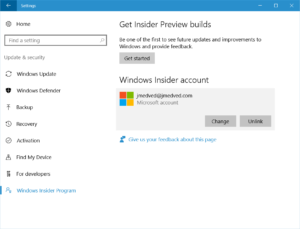 I am a bit crazy. Some say in general, while I will just use it to describe my choice of beta testing Microsoft's software. :)

If Microsoft had release candidate of either Windows or Visual Studio, I would install it. And I wouldn't pussy out and put it on some non-important server. No, I usually got that running on my daily driver.

And yes, this is definitely not what Microsoft recommends. And yes, this approach has bit me in the ass multiple times. However, I usually liked the new features enough to ignore the small issues. Well, no more. After what seems ages on the Windows Insider track, I have given up.

First issue I had with Windows Insider is the fact it would obliterate custom drivers on every install. As I have Asus N56VJ that needs the same for keyboard shortcuts (e.g. to disable touchpad), this was annoyance. And you couldn't just reinstall driver - it took a bit more involved process to recover it.

Another issue was pushing of damn Edge. Every freaking time I would get new insider build, Edge would appear in taskbar. And not only there - it would take over the file associations too. A bit hypocritical and a whole lot annoying. That is, when you can switch it - there was a full month where "bug" in the build prevented moving away from Edge for http file handler.

However, both of these issues, along with a few others, were just a minor annoyances. Computer was still usable after them and I could get everything properly working within a day while not losing too much time.

Straw that broke my back were issues with VirtualBox. For the last few months every Insider build broke VirtualBox and VMware in one way or the other. While some were minor and easily solvable, others required either waiting for the new build or update from manufacturer. And, strangely, I found Microsoft's Hyper-V re-enabled every time.

As someone who runs quite a few Linux related virtual machines (not all are properly supported by Hyper-V), I simply cannot be days without a running system. And the pressure of knowing that, even if I do get it working, it is never more than a build away from braking was simply too much.

Year ago, I would have jotted this just as a cost of getting early features. But insider updates lately became just noise as no proper feature has been introduced in ages. It seems to me that last few of them were just a sneaky way to reset my defaults for the damn Edge and show some Hyper-V up my bum.

Due to all this, I stopped all insider builds to two of my machines.

My main multimedia PC went to Linux Mint and my daily driver went back to the last Windows 10 official release. Frankly, if it wasn't for Visual Studio, I would have moved it to Mint too.

It is a sad day when Linux distribution is valid and less annoying than Windows...