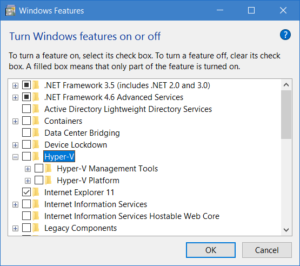 Ever since I have upgraded Windows 10 to build 14931, whenever I tried to run VirtualBox, a blue screen crash would happen. Worse still I only had "The system has rebooted without cleanly shutting down first. This error could be caused if the system stopped responding, crashed, or lost power unexpectedly." in the Event Viewer. As the old joke goes: absolutely correct, but still useless.

To make things even worse, under known issues for the release there was "Oracle VM VirtualBox will crash on launch after upgrading to this build." So I gave up and tried to install VMware Player. I mean, not all third-party virtualization software can be broken.

Guess what, VMware wouldn't start either. However, there was no crash but a slightly cryptic message about something called Device Guard and a link to knowledge base article. While my issues didn't closely match described ones, article did put my sights on Hyper-V.

After going into Turn Windows features on or off and disabling Hyper-V followed by reboot, I could start VirtualBox once more.

I haven't went into further troubleshooting - it just wasn't worth it. For one, I do not use Hyper-V on my laptop so turning it off didn't hurt me. And, as I am running insider builds, I am sure that, by the time this build comes to slow ring, there will be some workaround either on Microsoft or Oracle side. In any case, my problem is solved.

5 thoughts to “BSOD When Starting VirtualBox”