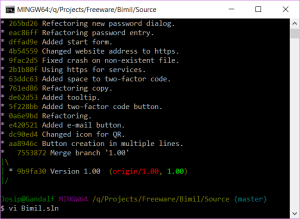 During BUILD conference Microsoft announced it would be possible to run bash shell and Ubuntu binaries on Windows. My personal reaction to this was meeh.

Those familiar with me and blog might know I love some things about Linux – especially bash – and I have more Unix/Linux-based computers than ones running Windows (although the number is close). For server-like tasks – even at home – nothing beats Linux. Yes, learning curve is a bit steep due to heavy reliance on the command line but that becomes a strength once you get used to it. And don’t start me talking about superiority of SSH. Anybody with interest in technology is losing a lot if they don’t at least try Linux.

Reason for my less than warm welcome is because I already have all Linux command-line applications worth running under Windows. If you download Git for Windows, you will get Bash shell and bunch of tools that go with it. Frankly, I rarely go into Windows command-line (or its bastard child PowerShell) anymore. Bash is simply more powerful and more practical. With a few easily remembered commands you can do wonders – especially when filtering files. And anything bigger 95% of time has Windows version too.

I don’t view Ubuntu on Windows as a bad step. But I don’t believe it will bring much to developers who had bash running on Windows, one way or another, for years. Considering it is a Windows Store application I am sure there will be enough gotchas to keep it from being practical…

Of course, details remain to be seen once Windows 10 Anniversary edition is out.