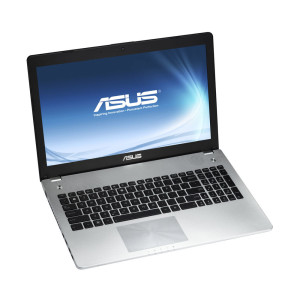 Since my old HP 6730b died I had to get myself a new notebook. I had a few really simple requirements: 15″ screen, full HD resolution, i7 processor, and a possibility to replace DVD for second hard disk. As you can see, I was looking for a workhorse, not a ultrabook.

Asus N56VJ comes pretty close with Intel i7-3630QM, 8 GB of RAM (2x 4 GB), and a 15.4″ full HD screen. Graphics side is covered with nVidia GeForce GT 635M when you play and on-board Intel card for basic tasks. It also came with 1 TB hard drive, unfortunately only at 5400 rpm. First thing I upgraded was drive and Windows 8 now boot in less than 10 seconds. This machine has lot of performance potential and it is not afraid to use it. Only thing I found missing was a TPM chip.

From looks alone this is probably the best laptop I have ever owned. Body is made of good quality plastic (visible on bottom) but with almost all user-visible surfaces covered with aluminium. While it will be a bit cool to touch at first, it heats really quickly and looks are beautiful. All user-accessible electronics (e.g. RAM, HDD) are accessible behind single (sadly non-captive) screw. And did I mention that it looks great?

I am not fan of chiclet keyboards but I got used to this one really quickly. It has nice feel and key react even when you hit just one corner. Layout is full 102 keys and most of keys are where you would expect them. Annoyingly this is not true for Page Up/Down, Home and End keys but it is hard to lay blame on Asus. For some reason all manufacturers try to keep them at most unsuitable place.

Cursor keys on this laptop also suffer bad placement combined with their slightly smaller size. Since they are not separated from other keys it is really easy to miss a column and press numerical keys instead. At least keyboard is backlit thus you can always visually double-check where your fingers go.

Keyboard backlight is nice, has three levels and some driver issues. When you boot your computer you will have keyboard backlit for few seconds, only to turn off when you are faced with login screen. So you will need to enter your password in the dark. After logon, keyboard will light-up again. It would also be nice if CapsLock and NumLock had activity LED integrated into a key but it is rare to find laptops that have such an obvious feature (e.g. HP nx9030).

Real sore point for this laptop is its touchpad. First, it is a bit too big and as such you cannot really type without ever touching it and thus making occasional mouse movements. Its stylish flat appearance will also not last. In less than a week you will notice it dipping (~1 mm) on side of left button. And yes, it is a permanent change. Two hand operation (one hand doing clicking and other one doing moving mouse pointer) is almost impossible. You see touchpad is touch-sensitive even on its buttons and thus you will cause all kinds of unwanted movements.

Just to annoy you more, occasionally touchpad will stop responding at all. For a second or two nothing would happen and then it would go alive once more. It is not unlike waking wireless mouse after not using it for a long time. It is impossible to use this laptop without external mouse for any prolonged time.

Another downer for me was customer service. Maybe I was an HP man too long, but I am saddened by lack of Service manual. If I ever need to open this machine (e.g. to clean a fan) it will be messy work based of trial and failure.

I find it very strange that Asus doesn’t offer a caddy for secondary drive although this laptop is quite capable of supporting it. There are third-party caddies around but customer support opinion is “… and we suggest you not to do this, it will break the warranty.”

This is a good laptop for someone who wants a workhorse. I can only hope that Asus will improve its customer service and feed their trackpad designer to dogs.

[2014-12-26: I got myself a replacement battery. I simply didn’t see point in getting original one at three times the cost considering its lousy lifetime.]