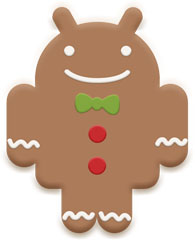 Here I am speaking of Gingerbread upgrade for HTC Desire. And in short – it was worth it.

First thing that I noticed after upgrade was different vibration feedback on key press. I cannot say whether it is better, worse or just a product of my imagination but it is noticeable. :) Screen looks the same as in Android 2.2 but there as subtle differences (e.g. icons in status bar).

There is improvement in speed. It might be just effect of finally clearing phone of all nonsense that got installed over these months but I think that there are some optimizations behind it also.

Although HTC did cut some applications, only one that I found missing from original ROM was Flashlight. Since this application’s install file is included in same zip file that brings update, I didn’t miss it for long.

Calendar application got small change – addition of time zones. This feature is worth the whole upgrade mess to me. As with all killer features most users will neither need nor notice it. However, if you travel a lot this is life saver.

Additional nice touch comes in form of “Pocket mode”. It basically makes ring tone extra loud if it detects that you have phone in pocket or case. I still have to see how this will work in practice but it at least shows some actual thinking.

And that was all that I consider worth mentioning. This is not a major upgrade as far as user interface goes nor it is as different as HTC would make you think. It is just a simple evolutionary step.