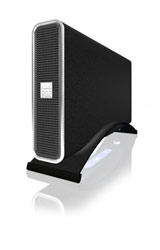 I bought Icybox IB-NAS902 to serve as cheap backup solution. It seemed like a perfect device for job. It supports SATA 3.5" HDD and it has both USB and Ethernet connectivity. And it is dirt-cheap.

For my particular scenario 100 Mbps network was good enough and, since samba was supported, Windows should connect like a charm. That was partially true since Windows XP did connect but Windows 7 refused to cooperate. Short investigation has shown that device uses ancient version of samba protocol and solution was to lower Windows 7 security a bit. Not an ideal solution, but good enough.

I was little worried about using FAT32 as file system since there is no support for files larger than 4 GB but that proved not to be a problem. When drive got accessed over network it would just split and combine large files seamlessly. When I connected over USB, I would see them as separate files. That seemed like bearable solution since all big files I had were DVD backups and, in worst case scenario, I could just grab originals and recreate them.

Configuration itself was ugly but simple and it would almost always work. It had tendency to turn on DHCP server after every restart but since it was slow to respond, my DHCP server ended up winning all the time. This was not something I liked but, again, I was willing to accept it.

Daily synchronization discovered another fault. As long as there was single computer accessing it everything was going fine. When two computers did synchronization at same time (or there was heavy traffic) everything would break apart. First it would slow down and then it would reboot. To make things even worse, data consistency would go to hell. After doing daily sync (diff-only) for a month I did chkdsk. Over an hour I looked at errors that touched almost every file on disk. This is not something that you can tolerate in your backups.

At the end, I gave up. I just connected this drive to my existing file server as another USB drive. For now it seems that direct SATA-to-USB bridge works just fine.

I cannot recommend this enclosure to anyone. It is probably cheapest 100 Mbps NAS you can find but it is useless in that mode. It does work as USB enclosure but it is both bigger and pricier than anything else out there.

It is a great idea ruined by the lousy firmware.