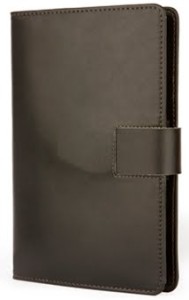 As regular readers are aware, I became owner of BeBook mini. While older device (BeBook one) came with leather cover, this comes without one. This being quite a new device there was hardly any choice. One of rare cases was ($24,99) STYLZ's Milano cover.

It took a while for it to arrive but it was definitely worth it. Attaching BeBook was as-simple-as-it-gets and no button or lever was blocked by it. Only two things that you cannot do with this enclosure were performing reset and exchanging battery. Since I do not need those on regular basis it is compromise I am willing to take.

Cover itself is of three fold design with BeBook laying on one side and another side serving as padded screen protection. Once that side gets opened you get three slots for credit cards and/or business cards. Above them are two places for SD memory and that is all.

For keeping cover closed one piece of leather is used instead of magnetic latch found on most of covers. It feels weird at first but I found it quite good system after a while. After two months of regular usage leather is still soft to touch. Scratches that it gained do not look too offensive and give nice charm to it. It looks to better and better with each passing day.

Only thing that I found missing is lack of placing for pen and paper. If they added a place for few pieces of paper and hinge for a pen, I would be happiest man alive.