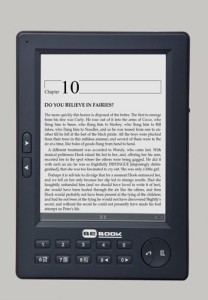 Ever since I saw Sony’s PRS-600, I was searching for my e-book reader to call my own. I wanted something cheaper and similar in size. I did like other Sony devices – PRS-505 and PRS-300, but they had one big flow – they weren’t available in Croatia.

Looking for alternatives, I came upon quite a few devices and my choice was divided between Jinke Hanlin v3 and v5. While v3 had little bit bigger screen (6 inches), I decided upon newer v5. It has smaller screen (5 inches) but it also features faster processor and newer display controller.

Since there is BeBook mini available in Croatia (Sveznadar bookstore), I decided upon it. It will definitely make my life easier in case of warranty.

Device is fairly light (160 g) and it fits hand quite comfortably. There are three separate sets of next/previous buttons so there is no problem finding comfortable position – even if you are left-handed.

Screen has great resolution (600×800 at 200 dpi) and it is quite confortable to read. If you have light pointed right at it, there is some reflection, but it is quite manageable. As with all eInk devices, there is black flash upon page change but I got quite used to it after a while. Epson controller and fast processor (400 MHz ARM) are doing quite nice job at minimizing time between page turns.

I was quite surprised that my device came with last firmware update already installed. While procedure for installing firmware is not too hard, this is quite a nice gesture from manufacturer. Great thing to note here is that boot loaded is in separated area of flash and there is almost no possibility of bricking your device with bad update. If something goes wrong, just repeat update.

I will not list all supported formats here since list is quite extensive. I will only note that there is no support for newest docx (Microsoft Office 2007) file format. Older doc files are supported so conversion is not too hard. Some formats are supported by Adobe’s engine (ePub and PDF) and others are displayed by CoolReader so there are some inconsistencies in user interface. Nice touch is selection among quite a few fonts already integrated within system or uploading custom one.

Bookshelf interface supports folders as main sorting mechanism and I like this quite a lot. Only issue I found with it is displaying system folders – fonts, Digital Editions and Restore_PC folders are always shown and there is no way of hiding it. Since one entry is already used for Recent files, only four entries will be visible on first page. This means lot of “next page” movement – especially if you happen to have Work folder that happens to be on far end of alphabet.

I find this device quite comfortable to use. It may not be easy to use for non-technical person, but it is getting better and better with each firmware update. If it continues this rate of development, we will have a treat in a year. For those with little bit more free time and courage, there is also SDK available. Customization may commence.

[2010-09-13: Unfortunately my device got broken – all analysis point to screen glass damage. I am open for advice regarding which device to choose next.]