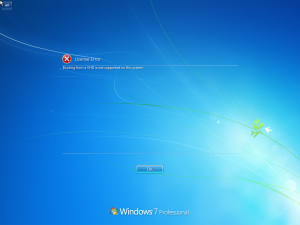 During Windows 7 beta I fell in love with booting from virtual disk (VHD). Now, with Windows 7 release candidate out, I decided it is time for new set of virtual machines.

In order to speed up process, I was using WIM2WHD script to make disk image. After images were done, small play with bcdedit solved booting issues.

For my first virtual disk I selected Professional edition of Windows 7. Booting went without hitch, setup sorted out it’s drivers and asked some questions. After final reboot I was greeted with “Licence error”.

That’s right. Nothing bellow Ultimate will give you option to boot from VHD file. While there is no good technology reason for disabling it, it seems that someone at Microsoft looked at whole picture and noticed that no matter how many Windows 7 installations you have, you are still on same hardware and thus one key will allow for multiple installations. Since preventing that would probably take too much effort, they decided to make it more expensive in the first place.