Windows 2008 Server was publicized as greatest OS ever. It did share its base with Windows Vista but it was "sooooo much better". Some guys even advocated use of it as client OS for power users.

Since one Belgian MVP deemed me worthy of MSDN Premium subscription (I hope that it will last until Windows 7 is out) I decided to take full advantage of it and download Windows 2008 Server (Standard Edition). Since I wanted to try everything it has to offer I gave it home on my new laptop - 64-bit capable. Plan was to install it over Vista since I haven't anticipated any problems and that Hyper-V thing looked worth sacrificing all disk space for. 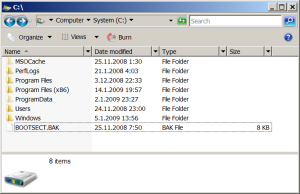 Installation procedure looked strangely familiar but after installation finished and everything booted up, I saw worst looking Windows interface ever. It looks like old lady with face stretched from all plastic surgeries she had in order to look younger. But no matter how persistent, at one point she needs to admit that there are more better looking young girls than her and just give up on whole "young look" thing. For me first impression with 2008's default theme was just that. Once good looking interface ruined by all breadcrumbs, column modifiers (if they are called like that), some blue/green buttons sticking out... You can see that it was not designed for that. I do know that you can get that same look in Windows Vista if you go on classic road but normal person will never see it since default is Basic theme (or Aero if your card is detected by installation). Does it take that much memory to show Vista Basic look by default and put this old interface to retirement?

Since I wanted system to look and behave like Vista (good parts of Vista), I needed to install some additional stuff. First there was Desktop Experience installation. After that you don't get anything since you need to start Themes service manually (!). I needed sound so I started Audio service also (was it so hard to make it a checkbox choice at features window?) Since I do search a lot, Windows Search was installed next. I found installation procedure for SuperFetch also but it required some changes that I was not comfortable with. Of course I installed Hyper-V. That is one feature that could make whole procedure worth the pain of doing everything manually.

It is stable and looks just like Vista. Quite a lot of people didn't even notice that there was server on my laptop. Also every program and driver that worked on Vista, worked here also. I didn't notice that it was anything faster than Vista, but I cannot say that it was any slower. Since no benchmarks were taken, take this as my "feels good" grade.

I liked Hyper-V very much. It is hard to say anything more in details about such non-interesting topic like virtualization so "liked it very much" will suffice for now.

Someone decided that Server doesn't need any bluetooth drivers. Never mind fact that those drivers came with Vista and as such already had Microsoft's stamp of approval. Never mind all administrators which were used to install new OS on any computer they can get hold of (testing it before deployment). You couldn't even use drivers from Vista since some file parameters didn't match. However, with small file change I did manage to install them but whole episode leaves bitter taste.

I do not have slow laptop. 2+ GHz dual core processor, 4 GB of RAM and 250 GB hard drive are good figures (in my opinion at last). That is why I hated to be laughing object of friends when I played music and tried to do anything else. Whenever there was any activity on system, Windows Media player would pause for part of a second and then continue with playing thus producing nice stuttering effect. No other player had any problems so I assume that this was some optimization on Microsoft's side - thanks for nothing. [2009-01-26: Yes indeed, that was an optimization]

I also had some problems with non-Microsoft software. Some programs detect that you are running server version and thus deduce that some more money for their software would be great. Why same software is more valuable if I use it on different system - I do not know.

Hyper-V is great but consequence of it is not. Once Hyper-V role is activated you lose your sleep. For some reason Microsoft decided to kill sleep option if Hyper-V is installed. Although I cannot figure why implementing support for sleep is so hard - Hyper-V does have pause button. Just pause all machines when going to sleep. Idiotic thing is that computer will not have sleep enabled even if you are not running any virtual machines. What is rationale for this?

What do I run now?

Windows Vista. It is just so much more user friendly.

Although occasionally I wake up crying for Hyper-V.