My Corsair Flash Voyager has lost it's USB connector few weeks before, so I found my self shopping for new USB drive. I needed something that can stand a lot of abuse (I carry it on keychain in my pocket) and it needed to be small as well. 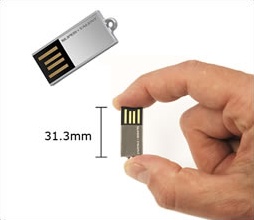 My choice fell on Super Talent's Pico-C 8 GB model. It is very small and feels like it can take a lot of punishment. In package there was also keychain attachment which I used to attach drive to my keys. That was lousy decision since that keychain was what failed me next day. My USB drive was lost. Since it was right before Christmas, it was impossible to find another.

As snow fell right before New Year, I gave up whole idea of ever finding it again and eBayed myself nickel version of same model. After snow, there came rain, and since temperatures were below zero centigrade, there was lot of ice everywhere (just in one morning, I removed more than five millimeters of ice from my car).

Yesterday (2009-01-20), around one month from date of loss, my wife found that USB drive. She found it at my parking spot in backyard. It was not visible before since it fell into muddy surface, later covered with snow, and it was iced for around two weeks. I assume that parking on that same spot, didn't help much in search.

I felt little bit uneasy putting it in USB, but my fears were unfounded. It worked perfectly and all files were there. It was just as nothing happened.

I do like device that can take that kind of beating and keep functioning. If only Super Talent could produce half-decent keychain...