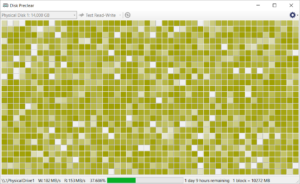 Some time ago I got into a habit of shucking. And each shucked drive I first fill with a random data. Purpose of this is twofold; the primary reason being security as disk filled with random data doesn’t “leak” information when you place encrypted file system on it (except when that file system is ZFS with native encryption but that’s a long rant for some other time).

The second reason is drive verification before I add it to my pool. While disks are hearty bunch these days, they do fail. And they usually fail either really early or really late. Giving it a bit of exercise early in their lifetime can sometime provoke failure. And if that failure happens you can easily do RMA. Doing the warranty replacement is also possible once they are shucked but might involve messing with manufacturer and their idea of “intended purpose” that’s part of their terms of warranty. It’s easier this way.

Previously I used a good old dd on my server for the same purpose but that actually became slightly annoying as I filled all the bays. Just to initialize a new drive, I had to remove the old drive and hope other disks are ok while I randomize the new one (can take a few days). Furthermore, that also meant I was increasing the CPU load (remember random numbers are not cheap) and temperature without writing any useful data. A task that’s more suitable for my Windows desktop.

With .NET 6 out, I figured I could give it a ride and write a Windows Forms application.

In a default state application will randomly traverse disk writing random data and verifying what’s written. While access might be random, every sector is accessed once and only once even in this mode. This is my favorite mode by far and I find it strangely calming due to how it looks graphically. But then again, I was always a fan of just looking into the defragmentation screen. :)

If you want the same effect you would get using dd with urandom you can switch to the sequential access. The same random data but written quite a bit faster since drive doesn’t need to seek all over the place. Of course, if security is not much of a concern, once could also fill disk with zeros or a “standard” 0x55AA pattern. While slightly faster, those modes are quite a bit less exciting.

I created this application to fill the need I had and no other application seemed to do exactly what I wanted. If someone else finds it useful, it’s awesome. If not, I still had fun creating it and that’s all that matters in the end.

Application download and link to its source code is available here.