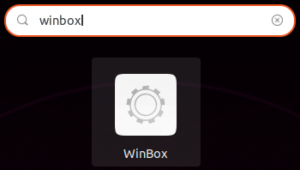 If you need to run Mikrotik’s WinBox under Ubuntu, solution is wine and 64-bit WinBox download. It works, as far as I can tell, flawlessly. However, I found dropping to command line every time I want to run it, a bit annoying.

Adding WinBox to activities is a two step process. The first step being creation of winbox.desktop file. In its simplest form it can look something like this

Then, to get application officially registered, we just need to let system know about it:

And this is all it takes for WinBox to find it’s home among other applications.