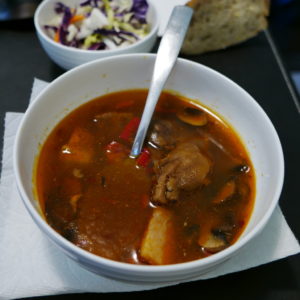 Pretty much every time I'm back in Croatia I have čobanac - a regional spicy stew with lot of meat and paprika. However, I never actually made one myself as it's a meal that needs a lot of cooking (ideally in a huge pot) and variety of recipes makes it impossible to make one-and-only proper recipe. However, wife and I figured we can adjust the recipe to get a tasty 4 liter meal in a small 5 liter pot.

As compared to normal čobanac, there are a few adjustments. The most noticeable of all is lack of hotness. Most of hotness in čobanac is actually from hot peppers and you'll note they are absent from the ingredient list. As parts of my family have different spice tolerance, here we have a non-spicy base and all spiciness can be added later either as cayenne or by using separately cooked chili peppers.

Speaking of hot peppers, west USA where I live doesn't really have the same varieties I'm used to in Croatia. I know many think chili doesn't taste of anything but the lovers of hot know there is a difference. If you cannot get feferoni pepper, serrano will probably be the closest in taste.

When it comes to meats, the more the merrier. It's common to have three or more meats but I found that pork knuckles actually make the biggest difference. I know they are not everybody's cup of tea but nobody is forcing you to eat them. However do cook them for both the flavor and density. Other meats should be added as goulash-sized cubes with the hardest meat coming in first. And do not get lean cuts as fatty meat will impart more taste. 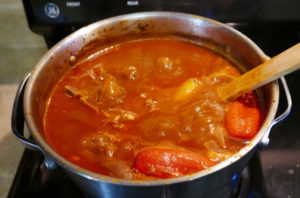 Any 5 liter pot will do but two features are really beneficial. The first one is a substantial amount of metal that can keep temperature. This will not only save you some electricity but also even out the heat making burned meal less likely. The other feature is etched volume markings. It makes trivial to add liquid and maintain its level. Yes, you can eye the level too but this removes all the doubt.

Cooking time can vary greatly but as a general rule you want to take it slow. Just keep it as barely boiling and give it 4-5 hours at minimum.

07:00 This is an excellent time to start čobanac if you want it ready for 13:00 meal. Just dice three onions as fine as possible (only pussies use machine for this) and start cooking them at low heat (3½) with a generous helping of oil. Do NOT burn them - mix often.

07:30 Your onions should be really soft now and it's a good time to add shredded carrots and celery root in addition to a finely chopped garlic. Add water for mush-like consistency. Risk of burning stuff is greatly reduced now but do not forget to occasionally give it a mix.

07:45 Add pork knuckle and bring water up to 2 liter line. Also add smoked paprika, salt, and black pepper. Increase heat just a smidgen (4) and leave to a slow bubble mixing it here and there. As water boils away, add more to keep it at 2 liter line. If you have some extra bones, this is a good time to get them in. Even the most of non-spicy folks can handle a single jalapeno so throw that in too.

09:00 Add beef and bring water to 3 liter line so that all beef is covered. Leave it to slowly boil.

09:30 Add pork and bring water to the final 4 liter level. As it slowly boils, add back water every half an hour with an occasional stir. If you are adding more meat later (e.g. lamb), keep water level a bit lower than 4 liters so that extra meat will fit.

10:00 If you have any lamb or similar softer meat, this is a great time to toss it in. While pork and beef are sufficient, variety doesn't hurt. Get the peppers (hot or sweet) in. Good time to chuck those bay leaves in too.

11:30 Add strained tomatoes. At this point one could add hot peppers or if trying to make a non-spicy base, here we can add just a few small sweet peppers. After stirring, take a taste to see if you need a bit more salt. If you want to stir up a controversy, you can also add 200g of sliced crimini mushrooms. Spice-lovers can alternatively look into getting a bit of juices from the big pot and chopped chili peppers into a separate pan on low heat until it reaches thin paste consistency.

13:00 Congratulations, your čobanac is done and ready to serve with a few slices of bread and a simple salad. It took a while but I promise it's worth it!

Ingredients for 4 liters of "basic" čobanac: