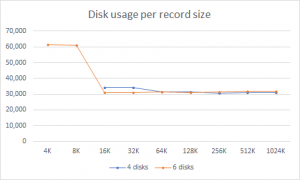 When it came to setup my remote backup machine, only three things were important: use of 4K disks, two disk redundancy (raidz2), and a reasonably efficient storage of variously sized files. Reading around internet lead me to believe volblocksize tweaking was what I needed.

However, unless you create zvol, that knob is actually not available. The only available property impacting file storage capacity is recordsize. Therefore I decided to try out a couple record sizes and see how storage capacity compares.

After repeating test three times with each size and for both 4 and 6 disk setup, I get the following result:

Two things of interest to note here. The first one is that small record size doesn’t really help at all. Quantity of metadata needed goes well over available disk space in the 4-disk case and causes extremely inefficient storage for 6 disks. Although test data set has 30.2 GB, with overhead occupancy goes into the 60+ GB territory. Quite inefficient.

The default 128K value is actually quite well selected. While my (artificial) data set has shown a bit better result with the larger record sizes, essentially everything at 64K and over doesn’t fare too badly.

PS: Excel with raw data and script example is available for download.

PPS: Yes, the script generates the same random numbers every time – this was done intentionally so that the same amount of logical space is used with every test. Do note that doesn’t translate to the same physical space usage as (mostly due to transaction group timing) a slightly different amount of metadata will be written.

One thought to “ZFS Record Size For Backup Machine”