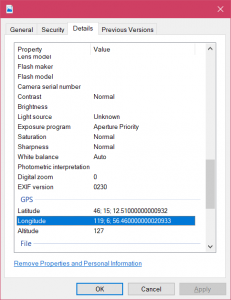 Do you notice something wrong with coordinates of this picture taken in Pasco, Washington?

Let's disregard for moment a pointless precision. Four decimals on Lat/Lon seconds already bring you into a millimeter precision range. With 15 decimals Windows show we are talking about less than picometer - couple orders of magnitude smaller than a virus and more than adequate to locate a single DNA strand (still in nanometer range).

Anything over 2 decimals on seconds (or 6 decimals on degrees) is already way better than any standard GPS can resolve. If we are talking about specialized equipment, we can probably justify 5 decimal digits. Going to 15 digits is just a sign of programmer too lazy to round.

Let's not even discuss that semicolon is used instead of proper signs for decimal degrees. Yes, latitude should be written as 46° 15′ 12.51″ instead but that is not the biggest fault.

Did you notice it yet? Yep, latitude has no north/south specifier nor is east/west shown for longitude. Alternative approach of having negative numbers instead of south and west is also not here. How do I know? Because this picture has been taken in North America and not in China.

In any case, I made a little calculator to convert Microsoft's coordinates into standard ones: