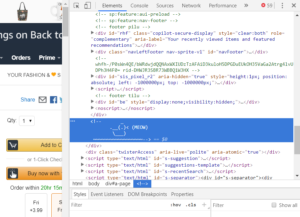 One day I was going over HTML elements on Amazon’s page and noticed one interesting comment. It was ASCII picture of a duck saying MEOW. Putting aside whether duck has capacity to produce that sound, I got curious why is that there? Is there a reason?

A bit of googling found me that MEOW is nothing new – it has been in code for at least 7 years now. However, duck seems to be appearing only since 2016. Despite all my searching I couldn’t really find what MEOW refers too nor why is duck now saying it.

My personal guess is that somebody was troubleshooting page loading and placed MEOW so it could automate it using grep command. Whether that troubleshooting happened in production (remember that Amazon wasn’t huge in 2007) or somebody accidentally pushed it live, we ended with the same result. I could bet Amazon developers noticed extra code quite quickly but nobody had heart to remove it. It was simply too funny. It became internal joke, an Easter egg.

Years later somebody working on that code portion saw it and though an update was in order. And how else would engineer express his love for fun other than in ASCII drawing?

PS: And it isn’t the first Easter egg coming from Amazon – who could forget “Thank You, David Risher” pun from 2007.