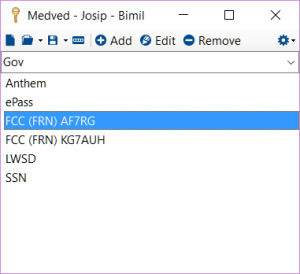 For this version probably the most notable change is copy/paste support. I know, how the heck can application in 2017 not support copy/paste in the first place. I can definitely think of an excuse or two but reality is that it was an inexcusable omission. Similar in the "revolutionary concepts", finally a right-click menu is available so you don't need to open an entry just to copy a password.

A lot of work has been done around textual passwords. As compared to the previous version, word count has gone down (27261 before vs 17701 now) but words that remained should be a bit easier to remember. Considering the default recommendation of 5 words per password is still giving you about 1 millennium in the worst case, I would say it is worth it. And don’t forget that estimate is conservative as heck: it assumes everybody knows all words you’ve used and that attacker can do 100 trillion guesses per second.

I also took liberty in removing the words found in the most common leaked passwords as well as showing the warning to user if he uses one. You can remove that warning in the Options at your own peril. :)

Filtering of entries has been improved, especially for the PasswordSafe imported categories. Additionally one can simply write * to show all elements and that should help the searches as well. Likewise Auto-type form got a bit of cleanup. Basic auto-type didn’t change but fields got Tab and Enter suffix each. It makes filling out information on forms much easier without having to predefine exact format.

A separate form for password history and other details has been added. While it doesn’t show anything that you couldn’t see in the old historical password combo box, different presentation does wonders for clarity.

Two noticeable changes happened on the setup side. The first one is change to .NET Framework 4 as .NET 2.0 simply became way too restrictive. I still didn't want to leave Windows XP users stranded so this was as far as I was willing to go. You will also notice that most of settings are not stored in registry any more but in textual file. This should make those using Bimil without installing it much happier. :)

A few additional minor changes and bug-fixes were made but I will leave it for you to discover. As always, you can download new version from Bimil pages or upgrade from within application.