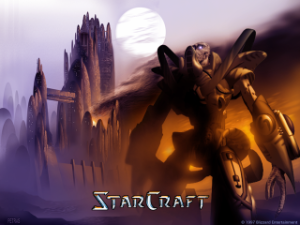 Nineteen years after the StarCraft's release, there is yet another patch. Alongside many bug-fixes, it also made StarCraft and Brood War expansion completely free.

While giving the old game for free could be considered a bit of a gimmick in the light of newly announced StarCraft: Remastered, an HD version of the original StarCraft, it is not only that.

Blizzard actually released new features within this patch and that is not the first time. They simply kept up the great customer care of the StarCraft saga. Frankly I wouldn't be surprised if we see another patch or two for it in the future.

Without the further ado, download the new (free) version and have fun.

PS: And yes, StarCraft color issue has been resolved.

PPS: You can also check some other free games from Blizzard. My personal favorites being The Lost Vikings but also Warcraft II and Diablo are nothing to frown upon. :)