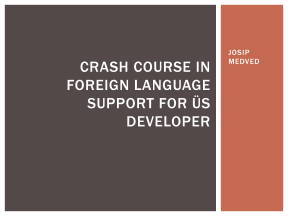 My third time at Seattle Code Camp is done. All that remains is to hear a few other talks and have some fun.

This year I gave two talks. First one was Crash course in foreign language support for ÜS developer. Not a line of code in sight but a lot of useful information - or so I hope. In this messy multicultural world knowing where things go wrong is an asset.

Second was an example driven Bash primer. It was an introduction into a command line possibilities that come as a part of Git for Windows. Despite the title, this talk dealt not only with bash commands but also with general GNU tools. And yes, all examples work on Linux too.

As always, PowerPoint slides are available for download but they are not a substitute for being present.