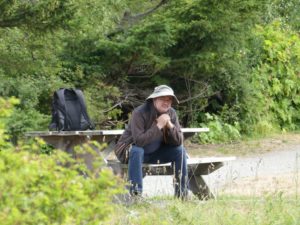 A month ago I went to visit some of the Washington state islands; San Juan, Whidbey, Fidalgo, and lot. As we don’t live in the immediate neighborhood and there are quite a few islands to visit, my family and I decided to book a hotel in Mt. Vernon. Best Western it is.

After a day full of boats and hiking we’ve finally arrived to the Best Western Plus Skagit Valley Inn and Convention Center in Mt. Vernon and were informed there is no water available. Frankly, the first idea at that moment was to cancel and go to another hotel. However, pleasant guy working the reception convinced us to stay – water is going to be available in 30 minutes. So we got our stuff to room regardless, went out for a diner, expecting to have shower after we are back. Yep, you’ve guessed it – no such luck.

But we were again assured water return was imminent. Few hours later we gave up on waiting and went for bed refreshed only by some wet towels my wife fortunately always carries. Yes, morning was water-less too with the same “almost there” statements. So we packed and went onto another day of hiking.

Once I got home and got a shower (finally), I’ve decided to tweet Best Western. And surprisingly got a reply pointing me toward e-mail to contact. And so I did. 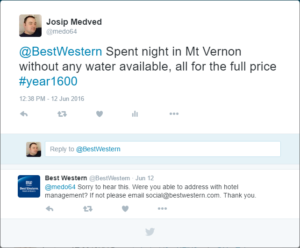 It has been more than a month since and still there is no reply from Best Western. Not an apology, not an additional question, not saying I’m expecting too much. Absolutely nothing. Full silence.

And frankly that pisses me off. If they didn’t reply to my tweet, I would be ok with it – just another complaint lost in the sea. What they did was masterpiece: they publicly replied to tweet and then just “forgot” to follow up. They made an impression of solving their customer’s issue while doing no work at all. Even better, if somebody calls them on that, they can claim its other department’s fault. Public relations dream – keep appearance of being active while not fixing anything at all. :)

All said, not much changes for me. I wanted to get the story out and I did. I don’t intend to ask Best Western for anything nor will I accept anything. I don’t even want a refund – what’s payed is payed. I am even going to stay in Best Western again – this was the first major issue after staying in quite a few of them over the years. Hell, I still remember one in Vienna as my second home.

Maybe the only thing that will change is me treating words “we’re going to have it fixed in 30 minutes” as a signal to get away as fast as possible.