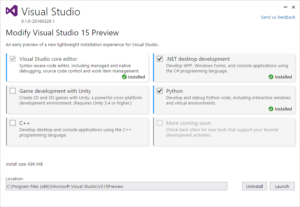 With Visual Studio 15 release getting close, a lot of new features are seeing the light of a day. One feature that doesn't get deserved attention is the new installer shown to the world on Build 2016 conference.

It is a simple and tiny (in Visual Studio terms) installer. Executable is under 1 MB and it gets all other components from the Internet. On its own it is not a news, but some optimization magic has been happening there so your downloads are reasonably small (again, in Visual Studio terms). I am sure as release day grows closer some things might gain some "fat" but idea is there. I just hope they will still allow you to install it from media too - having Visual Studio download itself multiple times for multiple computers kinda nullifies smaller downloads.

You can give it a test run yourself and see whether it improves your workflow.