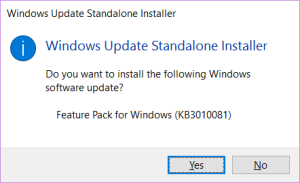 Coming from the Europe, Windows N is not foreign to me. For unfamiliar, N is a designation for Windows without Media Player. For most of installations I don't have any issue with this as I will install a media player of my own choice.

However, there are some scenarios where you might want to have Windows Media Player around. For example, if a program is using Windows Media control for playback, there is no alternative. For exactly those cases Microsoft does provide a Media Feature Pack adding all the bits N version took out.

So, when I had to do this on Windows 10, I knew the drill. Simple search for "Windows 10 Media Feature Pack" returned a link to download pages and short reboot later... I still had an issue.

Fortunately, knowing the KB article number, I was able to use Windows 10 Update Archive (not official Microsoft site) and figure Windows10.0-KB3099229-x64.msu was the droid file I was looking for. And another reboot later, Windows Media Player was installed with all annoyances it brings.

Let's recapitulate. Microsoft's own official download page for Media Feature Pack has a link to an executable that doesn't work with the latest Windows release. In the knowledge base they do include information about a newer installation but that executable is unreachable. The only way to get a file is to go to independent site and download it from there...