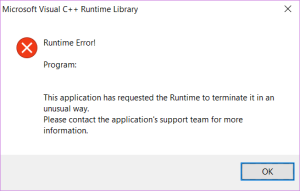 When I first got my hands on Mini Metro, it was over at the GOG.com. And I got dreadful Microsoft Visual C++ Runtime Library: Runtime Error!

Going through forums brought nothing useful so I contacted GOGs customer service. They’ve gave me a list of troubleshooting steps and I religiously went through all of them (even a strange suggestion to create a virtual screen?!). As nothing was really solved, it was the time to get out the big guns. In this case it was asking developers at Dinosaur Polo Club for help.

From them I got two steps. One was to install Visual C++ Runtime (different than what GOG guys suggested) and/or to try non-Galaxy build (Galaxy is GOG’s attempt to be Steam). Already fed up with all the runtimes I’ve installed so far, I tried non-Galaxy build first and it worked flawlessly. Problem solved!

After a few hours spent building subway, I was tempted by the other C++ runtime suggested. Would that make my GOG Metro work? Yes, I got another build from Dino guys, but that was just a zip file. Call me spoiled, but I prefer actual installations. And GOG has that. So I ran Visual Studio 2012 runtime and GOG’s Mini Metro started working.

However, that was not without cost – drivers for my Asus touchpad stopped working. As soon as I reinstalled drivers, GOG’s Mini Metro stopped working. Well, since I really needed touchpad drivers so I can have touchpad disabled (if you own Asus N56VJ you’ll understand), I just unpacked Dino’s build over GOG’s and called it a day.

Two things became obvious from this. One is that Dinosaur Polo Club has an excellent support and they didn’t even blink before giving me essentially another copy of a game. Yes, since it is a DRM-free build it doesn’t really matter if I have one or two or million of them – but that is exactly why DRM-free games are awesome – support doesn’t need to go through hoops to give you another copy.

Another is that allowing the use of GOG’s Galaxy client requires a bit of magic in the game and that magic is invasive enough to make game not work. I don’t know any details on what exactly went wrong there but Galaxy seems to need a bit of growing up.