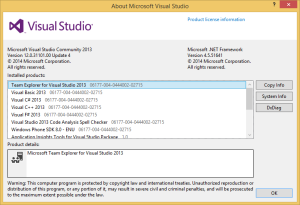 A bit over a week ago a new Visual Studio edition has appeared pretty much out of blue. For all practical purposes you can look at it as a cross between Visual Studio Professional (has same features) and Express editions (it's free).

Unlike Express editions, Community can only be used by an individual developer, for open source, for learning/teaching, and in a small non-enterprise settings. If you are working for enterprise company, you're out of luck.

Since Community is essentially the same as a Professional edition, there is not much new things that can be said about it. It can slice, it can dice, and it is an almost perfect development environment. Yes, there are Premium and Ultimate and they do offer some advantages (e.g. IntelliTrace is a gem) but most of the time one can live without those features just fine. Unlike with the Express editions you won't feel constrained with the Community.

Surprisingly you cannot really install Community edition side-by-side with any other paid Visual Studio. Official explanation is that this is because Community is the part of a same line as other editions but I still find it an unfortunate decision. Developers wearing two hats in BYOD scenarios (e.g. enterprise by day, open source by night) might get into some conflicting situations. Side-by-side with the Express editions will still be supported so not all is black.

Speaking of Express editions, it is not really clear to me what is their destiny. Currently they do stand together with Community but they do overlap quite a bit. If we learned anything from the past, their days are numbered. I would like to be wrong since I do love them. Even with all their shortcomings, I can still see them useful in multiple scenarios (mostly due to their quite permissive licence). I will miss them.

If you currently don't have anything better than Express on your machine and you fit into the restrictions, it is definitely worth checking out.