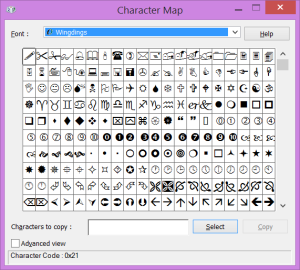 These days it is almost a common knowledge that J standing alone has a meaning of a smile. What you see as a J on the desktop suddenly becomes a letter J when viewed on (Android) phone. But why is that?

Answer lies in the dark times before the Unicode when only possibility to introduce new symbols was to actually swap some characters for them. It was quite a common practice to make fonts that consisted purely of symbols.

One of such fonts were Wingdings family. These fonts were then used in anything from Word to many custom programs. If your platform doesn’t support fonts or contains no Wingdings font (as Android), you would see symbols substituted for the letter characters.

Probably most commonly used in the emails are smiley symbols: J (J), K (K), and L (L). As Unicode became standard in communication, only smiley and frowny face survived. Other Wingdings characters remained just a curiosity and something you would get from Outlook users.

But maybe they will be coming back into fashion soon as Unicode 7.0 will contain most of them. Who knows, maybe even somebody makes an effort and J-weirdness becomes a history.

One thought to “J a Bit”