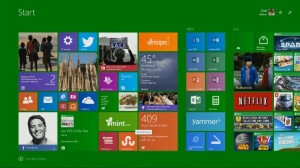 Let’s face it, Windows 8 was a hell for desktop users. It took until Windows 8.1 for things to be better. It wasn’t anything big – for me it was mostly boot to desktop that made it worthwhile update. There were some bumps left but nothing that bothered me on daily basis.

Microsoft is going further with Windows 8.1 Update. First major thing that awaits is proper Start Menu. It’s look is similar to what we used to have since Windows XP with a side made of Metro tiles. Since Desktop will be default for non-touch PCs (currently you must change a setting to get it), finally a desktop user can work without ever going to (mostly useless) tiles.

Speaking of which, they are suddenly not annoying that much. First of all, gone is annoying right-click behavior which would open menu at screen’s bottom. While not a problem for touch, desktop users had their mouse travel miles and miles for no good reason. Finally menu will open right over tile as logic dictates. It will take some time for other “modern” applications to update their behavior but it will no doubt happen.

For couple of useful metro applications welcome change is possibility to have them in taskbar. Not only that that makes them pinnable but it also allows for preview window interaction. And when you select them you will be greeted with titlebar. It doesn’t offer anything more than what you could do now, but it does allow closing without hitting Alt+F4.

Major feature that will make developers happy is possibility to target Phone, Tablet and Desktop with same code. If this gets executed correctly it will be best thing that happened to Store and it might make WinRT development actually a worthwhile task. Experience with last platform that promised the same (WPF anyone) is making me cautiously optimistic since platforms might drift apart already in next revision.

Manufacturers will be happy with free Windows license for anything smaller than 9″ and lower memory usage on RT platform. It still remains to be seen whether this will result in cheaper devices but at least nobody will blame Microsoft for high prices any more. Licensing for “normal” Windows remains pretty much the same.

Of course, nothing of this has been released yet and thus it is a subject to change. There is more than enough time to make things more “touch-friendly”.

PS: Yes, I know that Modern UI interface is not called Metro anymore…

PPS: To see all these features in action and more, you can watch BUILD 2014 keynote.

One thought to “Windows 8.1 Just Keeps on Getting Better”