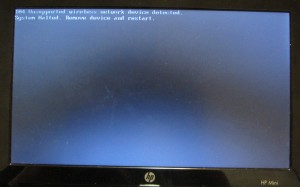 Due to my Intel NUC needs I got myself a new 802.11ac wireless card (Intel 7260). Since NUC didn't really need AC, I decided to put new card into wife's aging HP mini and take its N wireless. My hope was that newer card would improve wireless range just a bit and thus I would gain her eternal gratitude. That was the plan at least.

As it is always the case with small machines, replacing anything is not really straightforward and some disassembly is required. In this case it was just removal of keyboard and new card went in even a bit easier than expected. After a bit of fidgeting with keyboard's plastic tabs on reassembly I was ready to get into Windows.

Seconds later I was greeted with:

Yep, dear HP decided in their eternal wisdom to forbid wireless replacement. And I cannot imagine any other reason for this other than a case of pure assholeism.

It is definitely not for money. Not only that wireless cards almost never fail but their low cost would anyhow ensure that HP would see little to no profit on any exchange. Even worse, you can plugin another card that is same Broadcom chipset and it works. That means that they didn't force anybody into using HP replacement services.

They also didn't do it to force you into using HP upgrade - there is no such thing nor it was ever available. Maybe there were some plans but I doubt that because card was not really positioned to be user-replaceable.

Saving grace would be if they did it for compatibility. Maybe their testing discovered some bug on other cards so they decided to nip it in the bud. If this is really the case (no matter how unlikely it is) than it is pure laziness of engineering team. They decided to solve technical problem with a software block. And someone higher up decided to cover this up and not document such incompatibility anywhere. But I really doubt that.

Most likely story is that some "smart" manager overheard engineers speaking about difficult to replace wireless card. On that he said "We have it replaceable? We don't have that on list of features. Disable it." Engineer shrug and did as it was told. And now, years after that moment of stupidity, we have machine that cannot be upgraded. Not for technical reason, but for pure politics.