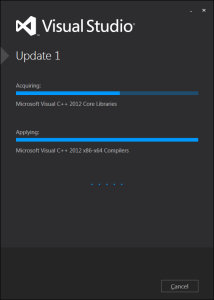 Service pack is forbidden word these days in Redmond. Therefore we got Visual Studio 2012 Update 1. Initial download is only 1 MB with rest of data collected upon setup. Real fun if you need to update multiple computers.

As far as update goes there just aren’t any major improvements. Mostly it is just bug fixes and stuff that ought to be in initial release.

One thing that I do like is how fast this update came after initial release. If they keep up this speed we might get next update in a few months. With obvious stuff gone that means that some goodies will be there. We can only hope.