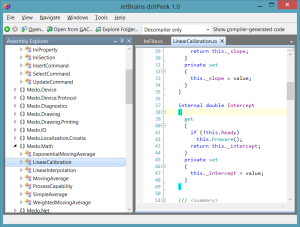 Almost two years ago .NET Reflector went into freeware history. First it was $35 but price has gone since to $95 these days. For something that was freeware once this is quite an increase.

Strictly speaking I was not really affected. Microsoft released source code for basic .NET libraries quite a long ago so most of my snooping needs were covered. But setting that up was pain-in-the-ass compared to the pure simplicity of .NET Reflector.

JetBrains, creators of ReSharper tool, created new tool called dotPeek. For all practical purposes we can view it as long lost cousin of .NET Reflector. Best of all it is completely free (at least in version 1.0).

Product is not without fault. On Windows 8 I could not get document search to work; source produced has extra spaces here and there; it does not support Visual Basic; there is no option to save a file; project export is not possible; it sometime breaks Alt-Tab behavior… Those are just biggest complaints that show it is definitely not without fault.

It worked perfectly on all code that I gave it and has always produced acceptable code. Stack trace browsing allows to track function calls across assemblies with ease and it is feature that I never thought of before but it seems so logical now.

Browsing though code is probably as good as it gets once you get used to keyboard shortcuts. And editor support for code folding is fantastic. Since that is what you actually need 95% of time, all bugs / forgotten features are easily forgotten.

It is tool that is worth its place in toolbox of every C# programmer.

P.S. No, it does not have stupid time restrictions that drove me crazy even in freeware .NET Reflector.

One thought to “DotPeek”