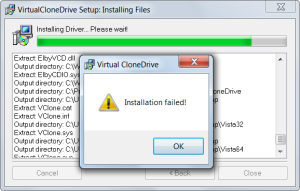 After fresh Windows 7 installation and some initial setup I came around to install programs on top of it. I find Virtual CloneDrive perfect companion for this job since most of software I have is in form of an ISO image.

This time I stumbled upon a problem. Every time I tried to install it I would get “Installation failed!” followed by “Completed!” and setup asking for restart. And CloneDrive would just end up as Unknown device in Device Manager. Every time before this program worked perfectly, why it would not now?

After short analysis I managed to find a problem. As part of install driver is extracted in user’s temporary folder (AppData\Local\Temp). Then system is invoked in order to install it.

Just after Windows install I have enabled encryption on my user profile. When system attempted to install driver it was accessing file in context of another user. Thus it was unable to read encrypted files.

Solution was simple – I just turned off encryption attribute for directory and started setup again. This time everything went in perfect order. After having similar issues with multiple programs, I permanently removed NTFS encryption on temporary folder. It seems that lot of programs use this folder during installation of system components and it was just too annoying to keep it encrypted.

Real solution would be for programs with system components to use Windows\Temp as temporary folder. However, you cannot control what other people do…