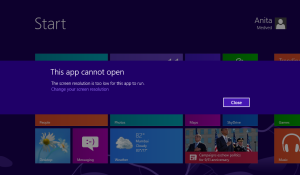 Last night I decided to do a big step – I wanted to update wife’s HP mini 5101 to Windows 8. It was nice Atom machine to start with and I further upgraded it to 2 GB RAM and 120 GB SSD. With relaxed graphic card requirements on Windows 8 it seemed like a perfect fit.

New Windows 8 interface is a bit controversial. Lot of people hate it, most users just bear with it and there are even some poor souls that actually like it. I was very curious in which group will my wife belong.

Well, involuntary haters it seems. Whichever tile gets selected, same greeting follows: “This app cannot open. The screen resolution is too low for this app to run.” Bummer.

And this is fantastic example how Windows 8 is botched. It is not one big wrong decision, it is bunch of small ones. One team makes decision that tiles will not be supported at certain resolution. Nothing wrong with that. As a developer I can only greet it.

But then another team makes decision that you cannot boot directly into desktop. Nobody can say with a straight face that this is technical issue. It is just some dickhead deciding that everybody wants this new stuff. And that idiot of course forgot to take valid technical issue into consideration – not all users can use it.

Why do you show these tiles to me? It is doubtful that monitor will grow with time. If tiles cannot be used, I do not want to see them. Allow me to boot directly into desktop interface and deal with tiles only when I can (e.g. on external monitor). Until that time, do not fill my screen with unusable clutter.

Technically Windows 8 might be best Windows so far. I dare to say that even backtracking on their Aero UI is correct step. However it seems that Microsoft lost their designer’s compass. Whole OS looks like unfinished alpha build. There are lots of potentially nice features but none of them got proper polish.

Lets hope that Windows 9 beta is right behind a corner.

2 thoughts to “Not So Live”