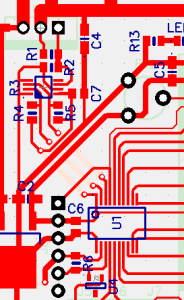 As with probably half of my review, I will start with some personal history...

My first rendezvous with PCB design was with almighty Eagle. This was defacto standard program for any cheap PCB creation. I hated it's non-standard interface, I hated it's component editor, I hated it's export pictures, you might say that I pretty much hated it's guts. However, it was only decent PCB editor that I knew and it was free (non-commercial use and up to a 100x80 millimeters). Our relationship was full of pain but it lasted for quite a few years...

At one point I decided that I had enough. I decided to make my own PCB editor (named it Dove :)). It would be as powerful as Eagle but with interface that humans can use. I knew that this was monstrous task but I figured that I might as well do stuff that I need first and then make it proper package somewhere into far future. I managed to bring it into semi functional state and I even made couple of boards in it. And then I made mistake of downloading DipTrace.

Originally it was just one of programs that I wanted to check in order to improve my own. But this program is PERFECT PCB EDITOR.

I am pain in the ass when it comes to uniformity - that is why I usually create all component packages myself. This was first program where I could create components without any issues. Just go and draw. All came naturally. Since creating packages is not something I do every day, standard and logical interface is the way to go. And DipTrace has quite a good component library to start with.

PCB Editor itself looks and feels like a standard Windows application (of course within reason). After few hours I felt at home with most of functions. And best of all - almost every function is where you would expect it. I forgot all dreams about my own PCB editor - this was what I wanted my editor to be. Level of detail that you can achieve is pretty unbelievable. You can do all work on single pin basis if you need to (or if you are half crazy).

Bad points, there are few. But then again, too few to mention... :)

Single reason why not to use this packet would be that it is not free. There is a freeware version that is limited to 300 pins/pads and two layers (but no limits on board size) and for hobbyist that limit goes to 500 pins (non-commercial usage only). If you want to use it for proper work there are versions ranging from 125 to 585 € (approx. $175 to $850). I don't say this too often for programs that are not Visual Studio, but I think that it might be worth it. And compared to Eagle it is dirt cheap.

Program is very actively developed and next version will bring (free of charge for current owners) 3D preview and bunch of other changes. It is not something I consider a killer feature but it does show that guys behind this program do care.

This program is a star. Definitely best PCB program yet - use it.

P.S. I am weird in sense that I do not use Schematic editor at all so I cannot say whether that part of package is as good as PCB editor.

P.P.S. No, I am not affiliated with DipTrace nor I received anything for this post. :)