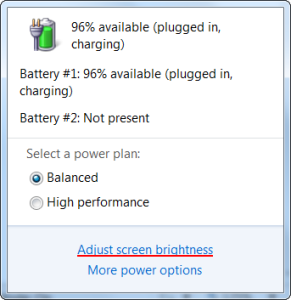 My laptop was on repairs for a while. Since it came back, I decided to update Windows with newest bits. One of installations Windows Update offered was also new driver for graphic adapter. Nothing fancy – just standard Intel Series 4 Graphics chipset.

Few days ago I, as I changed screen brightness, screen went black. And not pure black. I could see image but very dimly. I saw it before. It looked as background light is gone. I already saw myself packing laptop back for second round of repairs.

I shut it down (with good old Alt+F4 repeated multiple times). When I started it once again everything seemed to be alright. I was puzzled and when it happened again after some time. Since broken back-light doesn’t fix itself too often, I decided to search my system for cause of error.

It ends up that whenever I bring screen brightness to lowest setting (either by key combination or selecting it on slider) it turns off backlight completely. And there is no obvious way to turn it back on. No matter how much you increase brightness after that nothing brings light back.

Well, almost nothing. In Windows 7 you can use Win+P key combination to call upon window that gives you choice of display you wish to use. It was enough to change display to “Duplicate” in order to restore brightness. Since that left screen in resolution that was not optimal one, another call to Win+P window and selecting “Computer only” was needed to restore everything where it was.

Since I often change screen brightness, this is my workaround to avoid reboot each time I go one notch too far. I tried to restore driver to older version but, for some reason, I cannot get driver rollback to work. Updating to latest Intel drivers didn’t help much (Microsoft delivered 8.15.10.1872, Intel had 8.15.10.1986) since same “feature” is present there.

I am not sure how wide-spread this error is since I could not find anything about it on Internet (or I didn’t search good enough). However, I do know that my particular combination of HP 6030b and Intel Graphics 4 Series is affected. Lately, with this laptop, I feel that driver gods are not on my side.

P.S. No, screen is not broken, I tried older Windows 7 installation (VHD boot) and problem cannot be reproduced there. Only installations (both VHD and normal boot) where I use Windows Update regularly are affected.