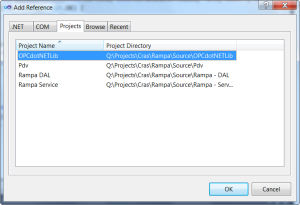 One of things that I noticed during work in new Visual Studio 2010 is speed of Add Reference dialog. This dialog now appears immediately while in old Visual Studio (2008, 2005…) this would take ages. I was quite stunned until I compared those two. There were two improvements that made this possible.

Loading of .NET and and COM references is done in separate thread. This means that while loading is in progress everything stays responsive.

Another improvement is that dialog opens with Projects tab as default one. Quite often this is exactly what you need – to add project reference. And even if you wish to add .NET reference, by the time your (non-threaded) hand switches to .NET tab, everything is already filled there (since loading is done asynchronously).

Worst case scenario is using COM objects and that will take awful amount of time for loading all references. But nobody uses those anyhow… :)