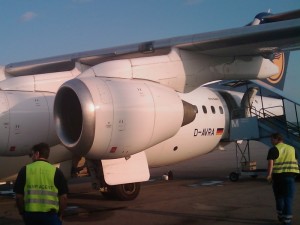 Due to airplane troubles, I was late for connecting flight and, since there were no flights that day, Lufthansa offered me a lodging. Here I must commend Lufthansa since whole process was done without any pain or suffering regardless of fact that there were quite a few of stranded passengers asking all sort of questions.

I got room at Sheraton Airport in Munich and it was arranged for shuttle bus to pick me up. After an hour someone finally appeared and started throwing bags inside. It took something like fifteen minutes to get to the hotel and then we went through check-in procedure. That took a while since there was only one guy at reception but he was fast so it wasn’t as bad as it could be.

Once I got my room (number 256, but on first floor – quite strange) I took a quick shower and went down for a free dinner. Well, it was not actually free, it is just that Lufthansa payed it and not me.

What greeted me was pasta and some sauce. Generally I do not have anything against such provisioning, but in this particular case it seems that pasta stayed out for a while. It was completely dried and pretty much worst pasta meal I ever had.

Since I needed to go very early, I got an early-bird breakfast and they even gave me free Taxi ride to airport (if you want to go before 6:30, you usually need to pay).

Final conclusion? Service is great – only if food was any good.