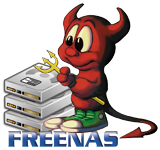 I always had a thing for file servers. Usually, I would just take some old machine, throw few hard drives inside and consider it done. However, as I got married, noise of computers became issue. I was just something I didn't notice before - all my "servers" were noisy like hell. In order to keep wife happy, I decided to invest a little into small machine without any fans. My final decision fell onto PC Engine's alix1d system board with box1c. While this is not most powerful machine, I considered it's 500 MHz CPU and 256 MB of RAM enough for a task at hand. I just slammed small 2.5" hard drive inside of box and it was ready to serve.

My first idea was to install Windows Home Server, but there were two problems with it - MSDN subscription didn't cover it at the time and it's system requirements (1 GHz processor / 512 MB of memory) were too high for this machine to handle.

After some testing, my initial installation was done with Windows Server 2003 and I had it going for quite a while (more than a year actually). However, Windows were not lively on this machine (probably has something to do with slow processor and not enough memory). Since that machine was used only to share files, my though were on giving it a little boost by installing Windows XP on it.

At that time I was preparing setup for one Hyper-V server and in order to do file sharing I decided on FreeNAS. This free solution was quite good for NAS tasks at hand especially because it could fit inside of 128 MB of RAM. That way, I would give it enough to work with and impact on other Hyper-V machines would be minimal. It took me a while to notice that it could be solution for my problem also.

Since my machine has support for Compact Flash, I decided to install FreeNAS on it. With Windows 2003 on hard drive, this would also mean that my original installation will be left intact and a backup solution in case of any problems.

I decided on version 0.7 RC1 which was latest version that I already tested to work in Hyper-V so that gave me confidence to try it on real machine. I was surprised with CD booting process that was painfully slow and after a while it would just stop at:

It would stay there no matter how long you wait. Upon pressing Ctrl+Alt+Del it would complain about parsing errors in config.xml and go into shutdown. My first thought was that there is some error on CD. However, same thing repeated with other CD's with different versions. Only than it occurred to me that I should run it in safe mode.

Once I selected safe mode, CD install was still slow, but it worked. However same issue occurred with booting process on installed version. Only difference was that it was left hanging at:

Safe mode still helped but since this machine was to be left unattended, it wasn't really a solution.

Next step was to disable things in BIOS one-by-one and culprit was found in ACPI power management. Once that was turned off, booting process went without a hitch.

I have it installed for a month now and I must say I am satisfied. Temperature of hard drive went from 50°C to 40°C just because of using flash media as system drive and having data drive sleep most of time. While level of comfort is little bit different (scripting in tcsh vs. programming in C#) and, although sometime I miss my remote desktop, this little guy does it's duties well.

8 thoughts to “FreeNAS on Alix1d”