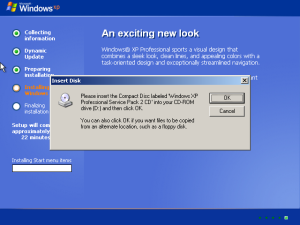 I do like Windows 7, but I still have few computers that for various issues (mostly driver availability) must work under Windows XP. Just to have fun, I decided to install Windows XP Media Center Edition this time.

Image of MCE is little bit bigger and it occupies two CDs. There is no DVD image so you are force to insert second one in appropriate moment. What came to me as surprise is that it requires Windows XP Professional Service Pack 2 to be inserted as third disk.

First attempt was just to cancel that dialog and that left me with unusable operating system since half of programs went missing.

For second attempt I just took Service Pack 2 from Internet and gave it to installation. It worked until next file was required and that file could not be found. That left me puzzled since that file was on CD1. I gave him CD1 and OS was installed. When I tried to apply SP3, everything just froze.

In third attempt, when asked for SP2 CD, I just returned first disk back in. I was surprised that installation didn’t mind and everything was installed perfectly. Even subsequent installation of service pack 3 went without problems.

Why did this happen? My guess is that slip-streaming is to be blamed. On original disks, everything was arranged in proper order but when service pack was slip-streamed (MCE comes with SP2), all updated files were arranged on first disk. Nobody bothered to re-arrange it and that caused need to reuse CD1. Installation itself knew only that it needs SP2 files and nobody bothered to change prompt to something more useful like “Please insert first disk again”.