My first programming steps were done in GW-BASIC but quite soon I switched to QBASIC. Those languages were simple to learn and they gave instant results. Yes, you couldn’t do anything really big (or useful) in them, but they had a power to make your eyes glow when some simple idea became a real program.

When I started programming for money I switched to C/C++ for a while, until I discovered Visual Basic. Although it had lack of C/C++ power and control, no one can deny development speed (faster I create something, more money I earn). 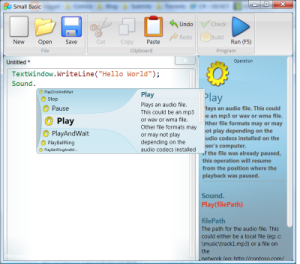 It is hard to recommend any high-level language for learning programming to kids. You just need to learn too much of boring stuff in order to do anything that looks even remotely fun.

But now, there is Small Basic. That language doesn’t even try to be serious. Whole point is just to have fun – not productivity. It’s interface is simple and nice. Intelli-sense is not only useful and descriptive (it is more detailed than some help files I saw) but it really gives you that “someone gave this some thought” feeling.

It does borrow some nice ideas from other “kid languages” (turtle from LOGO comes to mind) but there are some ideas that will take a kid instantaneously. For example, there is special class for accessing Desktop (e.g. change wallpaper) and accessing photos on Flickr. If that doesn’t enchant your kid, I don’t know what will. 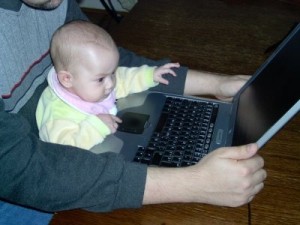 If you, as a big kid with big toys, feel left out in this story – you are wrong. You can extend this gem with your code written in .NET thus giving your kid access to “only sky is a limit” world of ideas. You and your kid can do each its part of code and have fun. I find this precious.