Long time ago, I have sinned. Yes, I used Visual Basic 6.0 to make programs. Even worst, I got paid to do so.

My work involved working with medical devices (oh, AxSYM, how I miss you…) there was one killer feature for me. Ability to set breakpoint, change some code and resume from that point was priceless. I would connect to device, when something in communication goes wrong, I would edit code in place, fix a bug and continue onto next packet. I could afford myself to be lazy (ok, there were timeouts to consider) and fix few bugs that occurred in single session. How did I liked it.

When .NET came I was missing that feature. I cannot say I was too sorry for old VB since new VB.NET was so much more powerful, but some things took a little more time and concentration to be done.

For Visual Studio 2005, there was a treat for me. They reintroduced that very same feature as “Edit and Continue”. It wasn’t as good as one in Visual Basic 6.0, even small changes would force you to restart, but smaller adjustments were possible. Life was good.

Recently, I switched to 64-bit system. I figured that since 64-bit systems were gathering momentum, so should I. 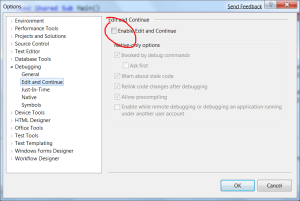 It was not as smooth transition as I hopped. There were driver problems, non-working 16-bit programs, some API calls that kept failing since I had int instead of IntPtr. All those things are nothing compared to not having “Edit and Continue” again.

Not only that I lost it, there is stupid dialog that reminds me of it every time. You can turn whole feature off in order to prevent that annoying dialog, but then you cannot play with it even on 32-bit applications (yes, feature still works if you compile for x86).

I do not use it often anymore. It is just to annoying to switch between Any CPU and x86 platforms. However, when I have some weird problem at hand, and I see that lot of debugging is involved, switching temporary into 32-bit world is small price to pay.