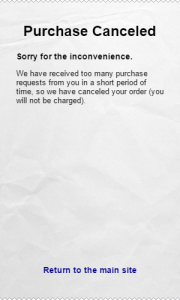 I am a fan of Humble Bundle so when they announced their winter sale, I of course had to buy something. As anybody with small kids will tell you, it is hard to go wrong with LEGO Harry Potter.

I used PayPal to pay gift purchase for one kid and tried to get the same for another only to be faced with “Sorry, your Humble Store order has been canceled. We have received too many purchase requests from you in a short period of time, so we have canceled your order (you will not be charged). We are very sorry for the inconvenience.” Well, I did try to buy second game less than another so I gave it a few minutes. Same again. Gave it 30 minutes, same again. Than 2 hours, same again.

At that time I decided to contact Humble Bundle support, the only website that gives you Forbidden error when you try to create a new account. At least their support system sends responses via e-mail so I could afford to give up on setting the proper account.

Talking with the Peter, their support guy, didn’t gain me much: “The purchase limits are part of anti-fraud measures”; “unusually large wave of traffic from one person”; “Sadly I am unable to lift the fraud protection”; and my favorite “Unfortunately I am unable to reveal that information”. I have been Humble’s customer since their very first Bundle. I have bought multiple games before (in one instance three of them). But now, two orders in a row are considered too many.

I understand that there was a need for some automated protections so people would not buy bunch of games and resell them. But I cannot believe that anybody would think a proper limit would be a single game per person, especially since they do offer option of a gift. And even if that is a decision, why would you not give possibility of an override to your own support staff? And why don’t you tell your customers how long they need to wait between purchasing two games? A day? A month? A year?

I did solve it at the end by using my credit card instead of PayPal. Somehow I am not considered a fraud if I use different payment method…

5 thoughts to “Humble Bundle and One Order Too Many”